Ortega plans to make a group of paintings that represents our contemporary situation from his point of view as a Peruvian artist living in the United States. 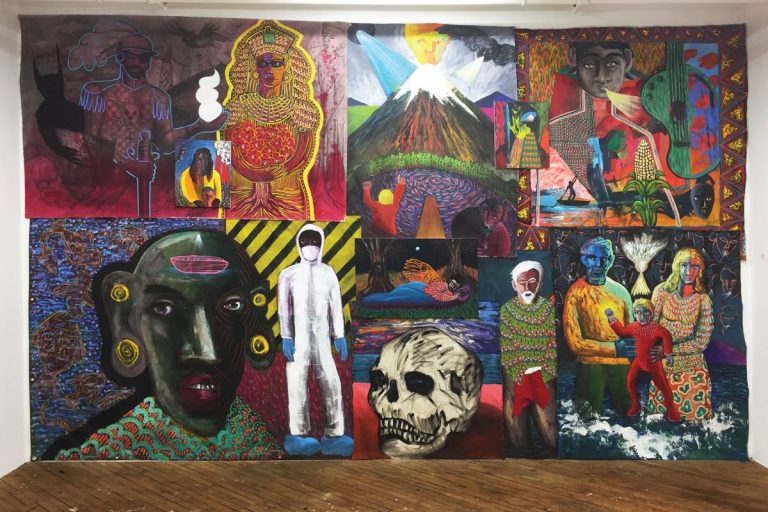 Ortega’s research plan looks to trace a continuation line between his artistic practice and the work made by immigrant artists in The Federal Art Project during the Work Progress Administration (WPA). Many of these artists were not born in the United States, but they have been influential and played an important role in American art history. Ortega notes that immigrants do not solely represent a labor force; they also contribute to the continued cultural development of the nation. Culture is a phenomenon in motion, of continuous innovation, for which there are no borders. When people emigrate, they carry with them cultural and intangible heritage, such a customs, traditions and art expressions. When they settle in new territories, the immigrants’ heritage mixes with the culture of the place where they arrived. This cultural displacement feeds the diversity of the communities.

Taking the artwork made by artists during the WPA as a historical reference, Ortega plans to make a group of paintings that represents our contemporary situation from his point of view as a Peruvian artist living in the United States. With these paintings, Ortega aims to show the voices of the community, their work, contributions, and what he considers to be a crucial element: the ethnic and cultural diversity of the country where we live.

Renzo Ortega (Lima, Perú 1974) is an artist based in Carrboro, North Carolina. Renzo received his BFA in painting from the Escuela Nacional de Bellas Artes del Perú (1999). He then studied at the Art Students League of New York (2000-04) and received his MFA in painting from Hunter College (2014). His artwork has been exhibited in solo and group shows in the United States and Perú. His recent solo exhibitions have been at Vox Populi Gallery in Philadelphia (March 2019), The Power Plant Gallery at Duke University (February 2019), and at The John and June Allcott Gallery at UNC Chapel Hill (January 2018). In September 2017 he participated in a Bi-Personal Exhibition with NC artist Antoine Williams at the Greenhill Center for NC Arts in Greensboro. Renzo’s artwork has been exhibited in museums such as the Works on Paper: 2017 Exhibition at The Weatherspoon Art Museum in Greensboro, in the S-Files Biennial (El Museo, NY 2007) and Queens International Biennial (Queens Museum 2006). He is a recipient of the 2018-2019 North Carolina Arts Council Artist Fellowship Award, 2018- 2019 Ella Fountain Pratt Emerging Artists Grant Durham Arts Council, 2018 Orange County Arts Commission Artist Project Grant and 2016 Queens Council on the Arts New Work Award. In 2013, as a Kossak Travel Grant recipient, Renzo traveled to Berlin to study German Expressionism, and in 2015 traveled to Honduras as a part of the U.S. Department of Cultural Affairs Cultural Envoy Program.