Mario Moore, a painter recently commissioned by Duke University to paint a portrait of Wilhelmina Reuben-Cooke, will be the artist-in-residence at the Rubenstein Arts Center in Spring 2022. While in Durham, Moore will visit classes at Duke and beyond, present public programs, and develop new work. 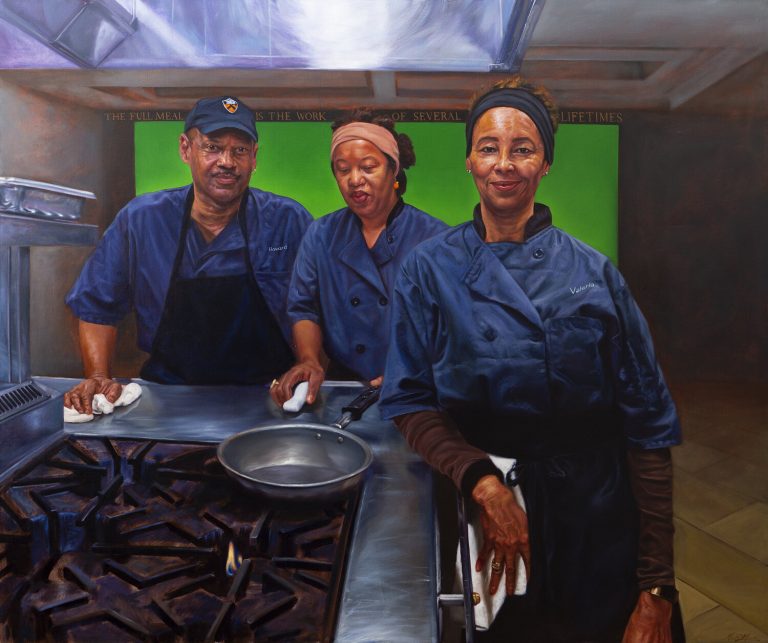 While Moore is at Duke, he will be based in the Rubenstein Arts Center’s painting studio, which has hosted extended residencies since its opening in 2018. Moore will work with Department of Art, Art History & Visual Studies faculty and students in addition to visiting Durham Public Schools, starting with Durham School of the Arts and the North Carolina School of Science and Mathematics. Additional public programs and studio visits will be offered to the community in collaboration with a variety of partners.

Community organizations and Duke departments interested in exploring ways of working with Mario Moore are invited to contact Bill Fick, associate director of visual arts for the Rubenstein Arts Center, at bill.fick@duke.edu.

Born in Detroit, Mario Moore earned his BFA from the College of Creative Studies in 2009 and his MFA from Yale University in 2013. His childhood was steeped in the arts: his father was a security guard at the Detroit Institute of Arts and his mother is an artist and art educator. Moore’s work responds to a tradition of portraiture—Diego Velazquez, Kerry James Marshall, and Barkley Hendricks are among his influences—but he chooses to recognize that would not otherwise receive such formal attention.

During 2018-19 academic year, while working at Princeton as a Hodder Fellow (granted to artists with “exceptional promise”), Moore took note of how most of the institutional portraits on display were of white men. He looked for the workers, mostly African American, that saw to the everyday needs of the university and painted a series of large-scale portraits.

“I wanted to make black people like my dad visible and put them in positions of power. In America, we put people in certain hierarchies and usually don’t consider blue-collar workers to be on the same level as other people around campus. It became important to me to change that.”

—Mario Moore, speaking to The Washington Post in January 2020

Princeton University has since purchased several of these portraits following their showing at its Lewis Arts Center in Fall 2019. Moore’s first solo museum exhibition, Enshrined: Presence + Preservation, was on view at the Charles H. Wright Museum of African American History in Detroit earlier this year.