Brooklyn, NY-based artist John Felix Arnold returns to Durham, his hometown, to create a new piece of immersive artwork in the entryway of the Ruby closest to the WXDU studio. 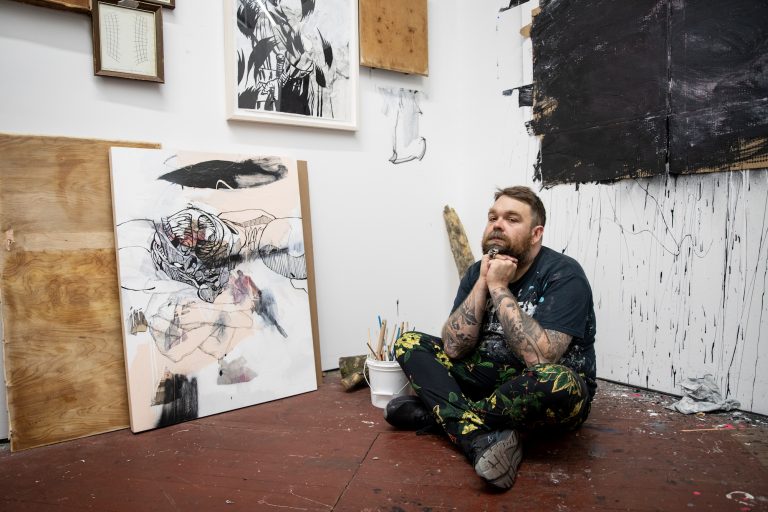 During his time at Duke, artist John Felix Arnold has created an immersive site specific artwork in the entryway of the Ruby closest to the WXDU studio. The cityscape of Durham and the soundscape of WXDU in the 80s and 90s, as well as his connection with ADF and the dance community, are integral aspects of Arnold’s upbringing, and still influence and guide much of his artistic voice. Arnold worked with the Spring 2020 Intermediate Drawing course (ARTSVIS 205/605 taught by Bill Fick) to create work that explored relationships with the history and energy of both Durham and WXDU, and these works are available for viewing. The primary installation piece situated in relation to the radio station has evolved greatly from its original conceptual direction, as much of the world has due to the emergence of COVID 19. The piece incorporates sculptural elements utilizing the architecture of the building as a foundation for movement. Here intentionally sourced materials and found objects from sites specific to Arnold’s experiences of being from Durham, and listening to WXDU, meld with concepts of movement and sound from his memories of dance and music. The work also portrays an intuitive expression of his observations of the changes to Durham’s cityscape and energy over the last fifteen years coupled with sudden shifts brought on by the pandemic.

With Arnold’s connection to Durham as a foundation, the work will draw on ideas and notions of home, shelter, memory, movement, community, change, and the evolution of mythology. While the work will be somewhat autobiographical, Arnold’s aim is to realize an environment that creates moments of reflection, honest curiosity, and connection for the viewers amidst the intense pressures of our age. An environment in which singular and shared experiences can result in new found connections and conversations, thus weaving a further sense of community in the realization that we all share space both physically and metaphysically. We all have a story to tell, yet we all do this together.

Learn about "Into Awakening," the work-in-progress in the Ruby

News
Bits and Pieces of Durham, and Life, as Art

Before the pandemic shut everything down, visiting artist John Felix Arnold III was working with students to create a conceptual portrait of Durham—his hometown—in the Ruby. 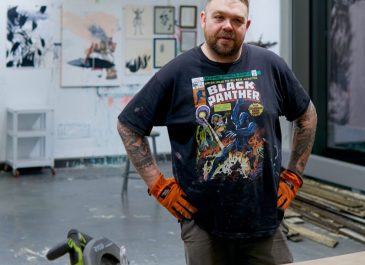 John Felix Arnold was born in Durham, NC. He received a BFA from Pratt Institute in 2002. He has exhibited with SFMOMA, B.R.I.C. Arts, The Luggage Store, Aggregate Space, FFDG, Joseph Gross Gallery, and Tokyo’s Spes-Lab Experimental Art Space. He is a Los Angeles Department of Cultural Affairs Grant Awardee, two time Joan Mitchell Foundation Grant Nominee, represented by the SFMOMA Artists Gallery, and can be found in Takashi Murakami’s private collection. He has worked extensively with Hirokazu Kosaka at the Japanese American Creative Cultural Center in Los Angeles, CA. He is featured in Aggregate Space Gallery’s First 50 Retrospective Art Book, and his work has been covered by press outlets such as The San Francisco Chronicle‘s “96 Hours,” Juxtapoz, Hi-Fructose, and Common Magazine (JP).

“Growing up as the son of two dancers, the relationship between fluidity and tension has always been very important to me and is ever present in my art. For me making art is a process of connection, realization and awakening. I explore ideas of existence, time, space, struggle and serenity through painting, drawing, mixed media, assemblage, and installation. I love paint in its honest ability to transmit feeling. I love reclaimed and found materials as they contain so many stories. I love imagery and the deconstruction of it. I love the language and possibility of the drawn line. I am fascinated by mythology and its evolution into our modern lexicon of pop and sub-culture. I often engage ideas of home, shelter, community, the environment and climate change, power structures and their effects on society. I love exploring physical space and dynamic ways through visual narrative experience, immersive/interactive and disruptive elements, and sound. I find importance in dissecting my own place in society and history through my work so as to understand ways to be a part of local to global conversations through art making.”- John Felix Arnold 2020