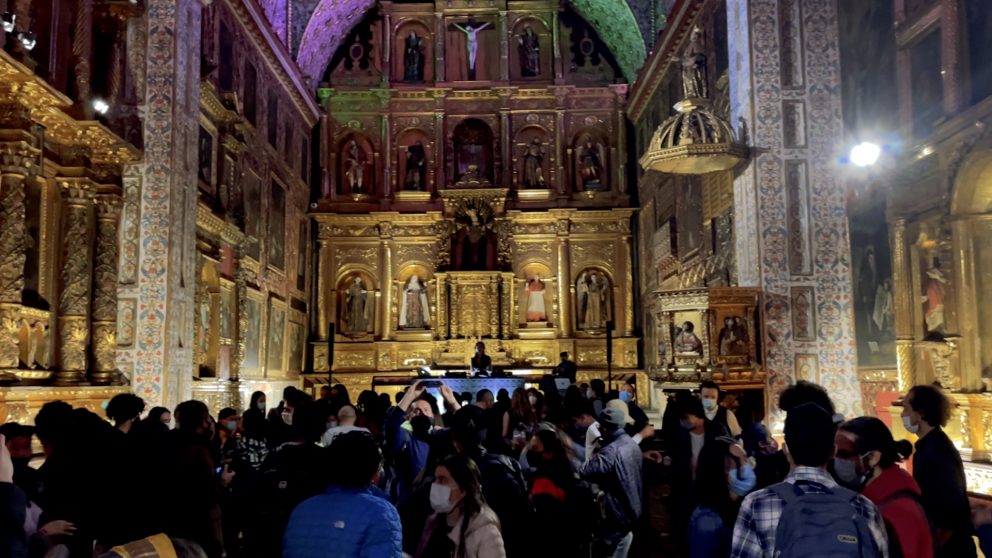 This program brings together works by Pedro Lasch that are as varied as their settings. Projected in large scale at museums and galleries, all works have been meticulously co-edited with Michael Blair to become video art in its own terms—as opposed to simply documenting Lasch’s social and site-specific art.

This program brings together works by Pedro Lasch that are as varied as their settings. A pandemic dance party in Bogotá’s baroque Santa Clara convent gives way to an irreverent choreography in Bologna’s Anatomical Theater. Movements of abstract color merge with views of Venice and textual patterns with Embassy Row in the US Capital, both capturing voice recitals once presented there, four national anthems at once, all in the wrong language. A soon-to-be demolished ice rink in Charlottesville becomes the stage for fire sculptures and performances, leading to a participatory candle vigil on ice to honor the life of Heather Heyer.

Projected in large scale at museums and galleries, all works have been meticulously co-edited with Michael Blair to become video art in its own terms—as opposed to simply documenting Lasch’s social and site-specific art. The exhibition also celebrates the fruitful collaborative process that started in 2015, when Blair began working on dozens of instructional videos for Lasch’s ART of the MOOC series, offered on Coursera and co-produced by Creative Time in New York and Duke University in Durham. Little did they know that over 60,000 people from 134 countries would enroll and view these videos, or that this process would lead to so many additional hours of working together on much more obscure video works never meant to be viewed on a computer or mobile device.

Note: ART of the MOOC instructional video selections presented on entrance monitor for context only. You may view all materials if interested using QR-code.

Staged in the spectacular baroque convent of Santa Clara during the gradual recovery from the global covid-19 pandemic, this work brings together tragedy and joy, faith and iconoclasm, colonialism and genocide. On November 12th, 2021 hundreds of people came to dance repeating iterations of the 1950s rock&roll hit La Plaga, recognized across Spanish-speaking countries world-wide, as well as English-speaking ones through its original, “Good Golly Miss Molly” by Little Richard.

Fire & Ice (In Memory of Heather Heyer) collectively reimagines fire as a positive force, presented on the ice rink of Charlottesville’s Main Street Arena, opposed to the hatred that led to Heather Heyer’s tragic death. On April 1, 2018, viewers joined the piece by skating, observed it from the ice rink wall, or were surprised by it from the street, seen through the arena’s beautiful arched windows on their walk upon the mall. Playful and solemn at the same time, the work is a celebration of Heather Heyer’s life, as well as the building that brought joy to so many people. Fire & Ice was the last public event at the arena, before it was demolished to be relocated from its historic site. As an ephemeral sculpture, the work is centered in the title’s core materials. Fire and ice have been revered in many cultures as basic methods of subsistence and key elements of matter. The work included three key elements: fire directly on the ice and a sculptural intervention, fire performances, and a final participatory candle vigil on skates.

Abstract Nationalism includes video works, visual scores, paintings, musical performances, and various media associated with socially engaged art. Channeling the intense emotional and cultural associations we have towards anthems and flags, the series addresses notions of independence, colonialism, (multi)nationalism, migrations, and mapping, all so deeply related to the history of nations and cultures. Conceived in 2001, but first presented at the The Phillips Collection in Washington, DC (2014) and its immediate Embassy Row neighborhood, the series has also been presented at the 56th Venice Biennale and Creative Time Summit, Seattle’s historic King Street Station, UNESCO’s InTransit, Laboratoires d’Aubervilliers in Paris, Bologna’s Anatomical Theater, and many other sites around the world. The following works from the series are included in this program.

Created for the 56th Venice Biennale & Creative Time Summit (2015), this video presents five national flags slowly transforming into each other —the United States of America, Mexico, Israel, Palestine, Italy, and China—in succession.  For example, the stars and stripes of the American flag transform piece by piece into the vertical green, white, and red of the Mexican flag, and so on. Beneath each flag, the lyrics of that country’s national anthem appear, unexpectedly, in the language of the country that follows—”The Star-Spangled Banner” is sung in Spanish, the Mexican anthem in Hebrew, the Israeli in Arabic, the Palestinian in Italian, and the Italian in Chinese. When first exhibited in Italy, audiences sang along to the work’s musical track. You are invited to do the same during this projection.

Commissioned for the Venice Biennale by Creative Time and staged in the Teatro alle Tese at the Arsenale, this work includes the anthems of Indonesia, Iran, Iraq, Ireland, each sung in the language of the country that follows it.

This work consists of individual anthems sung live in art museums and galleries for unsuspecting audiences. It was first presented as part of Lasch’s ‘Anthems for Four Voices’ at The Phillips Collection in Washington DC, where all the footage for this video originates. Selection of Anthems and Languages include: Mexico in English, Jamaica in Japanese, Yugoslavia in English, Chinese in French.

This work premiered at The Phillips Collection in 2014 and it includes the anthems the United Kingdom, United States, Uruguay, Uzbekistan all sung at the same time, each one in the language of the country that follows it.

Anatomy of the Nation

Anatomy of the Nation is a video artwork staged in the iconic Teatro Anatomico in Bologna, and premiered at the Museum of Modern Art (MAMbo). Along with other Bologna Social Practice Lab public productions, this work was created for the Academy of Global Humanities & Critical Theory and Fondazione Gramsci with co-director Rossella Mazzaglia and lab participants from around the world. Other Polit(t)ico interventions from the Abstract Nationalism series were staged at Bologna’s main square and Piazza Nettuno, the Museo Archeologico, and Piazza Verdi.

Michael Blair began creating videos in 2001. He has since produced and collaborated on a variety of narrative, documentary, and marketing projects, including work with organizations like the University of North Carolina Greensboro, University of North Alabama, and Pride: Durham, and film festivals like Full Frame, Cucalorus, and Tribeca. In addition to production work, he has taught post-production and screenwriting and collaborated with choreographers on multimedia design for dance performances with Hollins University and the American Dance Festival. He joined Duke OIT’s Academic Media Production team in 2015.