"Cornered" is an art installation using video projections to express the hopes and hardships of African migrants.

During her residency in the Ruby, Raquel Salvatella de Prada will develop the art installation Cornered for public exhibition. Cornered represents the motivation and struggles of African immigrants leaving their home country and making an attempt, most often failed, to cross the border from Morocco to the Spanish cities of Melilla and Ceuta, the only European cities on Africa’s mainland.

Cornered will feature video projections from inside a Moroccan table that is covered by a domed screen and fabricated by Salvatella de Prada. As they walk around the structure, viewers experience imagery that captures the atmospheric contrast between frustration and hope. Accompanying music is provided by Jonathan Henderson, a Duke graduate student in ethnomusicology and founding member of the band Diali Cissokho & Kaira Ba. Jonathan is a North Carolina-based multi-instrumentalist, composer, and producer. Diali Cissokho & Kaira Ba’s music is steeped in ancient West African griot traditions, but propelled into the twenty-first century by the modernizing impulses of a rock band format. Video and sound will work together to create an ambivalent atmosphere of frustration and hope.

Salvatella de Prada is assistant professor of the practice in the Department of Art, Art History & Visual Studies at Duke University. Her interests include commercial and video art, kinetic typography, graphic design, performance, and multimedia. While residing at the Rubenstein Arts Center, she will be working on building the wooden table, using the innovation studio at the Ruby for laser cutting and testing video projections and animations.

Experience Cornered, a visual representation of the struggles of migrants trying to navigate the dangerous chokepoints between Moroccan and Spanish territory, by Duke animator and video artist Raquel Salvatella de Prada. 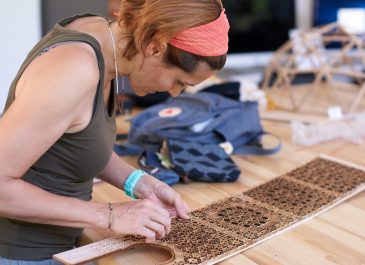