A Fall From Grace

A Fall From Grace is a multimedia project by Zaire McPhearson, MFA EDA '20, that tells the story of single Black women and their children involved in a cult from the mid-1970s through the early 2000s.

A Fall From Grace is a multi-layered story told through the voices of now elderly women that were a part of a Charismatic Movement known as “The Prayer Band.” This movement took place during the mid 1970s through the early 2000s. It was primarily comprised of single black women and their children who followed in the footsteps of a self-governed spiritual leader. Through the formation of her ministry, she manipulated her followers into believing that leaving the ministry would bring harm to their children. This movement started from a traditional Christian-based organization, The First Church of God in Christ.

As the cult evolved from a simple noonday prayer, the Church began to reject her teachings because they went against the church doctrine. This ultimately led to the beginning and rise of “The Prayer Band.” Control, fear, punishment, isolation, and ridicule also kept them from leaving the group. They were not allowed to make any decisions without the consent of their leader, or they would be severely reprimanded in front of other members. Convincing both the participants and herself that she was the intermediary between God on behalf of all the women in the group. She considered herself the voice of God, referring to herself as “Black Jesus in the Flesh” and “The Queen of the South.”

Isolated from the outside world, all non-Prayer Band relationships were destroyed. As “the way, the truth, and the light,” her tyranny maintained the final say. This group of women lived a very fearful life for over two decades before they were able to gain the strength and courage to move on and start a new life. This series gives a voice to the women that were silenced through mental, physical, and emotional abuse and their transition that led them to where they are today. This exhibition includes photographs, installation pieces, sculptures, and stained glass.

This project is a complex layering of stories that illustrates the lives of the remaining women who are willing to tell their stories and their long recovery back to their faith. Belief and Faith are powerful and in misguiding hands, can take you from the highest mountain to the lowest valley. A tale of misplaced trust and a prayer of hope tells the story of how “The Prayer Band” members persevered to give their families a new beginning. These women have continued their strong walk of faith and believe when you take your eyes off of God, you lose focus and fall from grace.

Zaire McPhearson received her B.A. from South Carolina State University (Orangeburg, SC) and received her Master of Fine Arts in Experimental and Documentary Arts from Duke University (Durham, NC). She is a multidisciplinary artist who works across various mediums and platforms. Her strong upbringing in the church led her to the exploration of African American entities through religion and faith. Through her experiences in church, she is able to navigate and explore religion through many controversial topics. She creates artwork that touches on the divine spiritual being and challenges the narrative of traditional biblical figures. She considers her work a love letter to black womanhood. 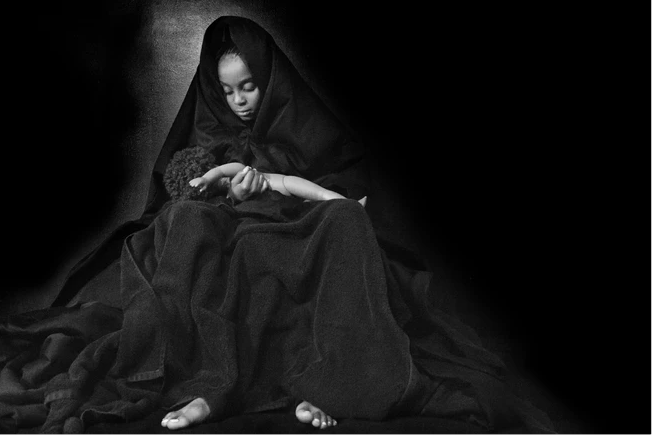 Zaire McPhearson MFA EDA ’20: A Fall From Grace
Last year, with spring thesis presentations postponed due to COVID-19, Duke Arts honored the MFA EDA Class of 2020 with interviews that explored the projects and their makers. “I want people who see this work to see the strength of black women. You can go back through our history and see the struggle that we’ve been through,” McPhearson shared.