Fostering Community Participation in the Arts

Learn more about the Duke Together strategic plan that sets forth increased opportunities for graduate and professional students to prepare for a wide array of careers.

Together Duke, the university’s academic strategic plan, includes a goal to provide a transformative educational experience for all students. The plan sets forth increased opportunities for graduate and professional students to prepare for a wide array of careers.

One of these opportunities is Duke Support for Interdisciplinary Graduate Networks (D-SIGN). Graduate students can build or extend their networks and integrate collaborative, cross-school experiences into their programs.

Six groups received D-SIGN grants for 2018-19. Fostering Community Participation in the Arts, led by three doctoral students, aimed to present a series of performative works that would promote an equal role between artistic creator and audience member.

James Budinich and Brooks Frederickson are Ph.D. students in Music Composition, and Rebecca Uliasz is pursuing a Ph.D. in Computational Media, Arts, and Cultures. Scott Lindroth and Bill Seaman served as faculty sponsors for their D-SIGN grant.

“Our first three sets of events have been extremely successful in building connections between Duke students and community members,” said Budinich. “Our approach of connecting with community partners has proved fruitful; the local venues have supported our artistic endeavors and connected us with their regular clientele, and working with local artists have built artistic connections in our local community.”

On October 19 and 20, 2018, musicologist Kerry O’Brien from Cornish College of the Arts visited Duke to discuss the work of American composer Pauline Oliveros. O’Brien presented an on-campus lecture based on her New Yorker article “Listening as Activism: The ‘Sonic Meditations’ of Pauline Oliveros.”

In January 2019, the group’s events included workshopping and performing improvisation-based works, written by Duke undergraduate and graduate students, as well as a world premiere by Stephanie Griffin. Griffin and Hilliard Greene, visiting artists for these events, joined the Duke New Music Ensemble in preparing these pieces. Griffin, who has a classically trained background, and Greene, a jazz musician, also discussed their own approaches to improvisation, and how they perform together as a viola-bass duo in their talk and performance at the Rubenstein Arts Center.

Margaret Schedel’s April visit began with a public hands-on DIY electronic instrument-building workshop, led in collaboration with Matthew Blessing. A musical group of undergraduate, MFA, and Ph.D. students then presented Schedel’s work with the newly constructed instruments the following day at The Mothership.

The group is planning to host a culminating event in the coming months.

Discover international contemporary art on view and in progress at the Ruby as Duke celebrates the opening of the new sculpture garden at the Nasher Museum of Art! 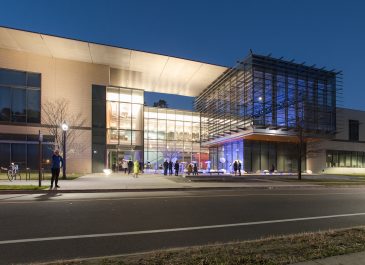