Duke Performances Brings Radio Haïti from the Archive to the Stage

Published By Miriam Sauls
Published on: May 6, 2020

The Rubenstein Arts Center hosted a Duke Performances residency with many layers: the world premiere of a commission, Breaking the Thermometer to Hide the Fever; public talks and class visits; and a supporting installation in the Murthy Agora, Radio Haïti-Inter: Three Decades of Resistance.

A multifaceted residency hosted by Duke Performances in early March was, as it turns out, the finale of live arts programming at Duke before in-person events were cancelled or postposed in response to COVID-19. And what a rich, vibrant residency it was.

As part of its ongoing From the Archives initiative, Duke Performances commissioned Haitian American singer-songwriter Leyla McCalla to create an original work based on the archive of Radio Haïti-Inter, which is held by Duke’s David M. Rubenstein Rare Book & Manuscript Library. From that commission came Breaking the Thermometer to Hide the Fever, which premiered in the Rubenstein Arts Center’s von der Heyden Studio Theater March 4-6.

The archive came to Duke in 2014, donated by the journalist Michèle Montas, professional partner and wife of Jean Dominique, who was the founder of Radio Haïti-Inter, the first independent radio station in Haiti. Dominique was assassinated in 2000 for his fearless programming and penchant for speaking truth to power.

When Dominique inaugurated Radio Haïti-Inter in 1971, he launched much more than a traditional radio station. He launched a people’s movement that sought to reverse the loss of national identity he saw happening as a result of international aid.

For the first time, farmers and fishermen and street vendors could hear what was going on across their country. But even then, Dominique couldn’t say things directly. He had to broadcast in veiled or coded ways.

“They asked me if I would be interested in creating a piece from the Radio Haïti-Inter archive,” shared McCalla, remembering when Duke Performances first approached her about the project. “I remember saying ‘Yes!’ and being really excited about it.” Her parents, both natives of Haiti, had immigrated to the US before McCalla was born, but she had visited the island several times, spending an entire summer with her Haitian grandmother when she was ten years old.

Breaking the Thermometer to Hide the Fever became a multidisciplinary performance set to music by McCalla, some of it original and some arranged from music she heard in the archives. The title refers to an expression the station’s journalists used to describe the violent silencing of the free press in Haiti by those who wished to deny or conceal the information they reported.

“Political resistance and music have long gone hand-in-hand in Haiti, from the traditional Vodou drums and chants to the political music that catalyzed opposition to the Duvalier regimes in the 1970s and 1980s,” says Laura Wagner, project archivist for the Radio Haïti Archives.

Translating thousands of hours of archival audio into a story that would be “digestible and palpable and moving was daunting,” says McCalla. “How are we going to do it justice, but also not put the burden of telling the entire history of the country and Radio Haïti into the performance?” wondered McCalla.

As project archivist, Wagner has listened to every minute of Radio Haïti material. She narrowed down a selection for McCalla to grow familiar with and provided historical context. She also curated an exhibit in the Rubenstein Arts Center (with support from its arts project program), “so that the burden of telling the entire story didn’t fall on the performance.”

Even with Wagner’s help paring down the resources, McCalla and her director, Kiyoko McCrae, still needed to find their theatrical way into the material.

McCrae’s instinct was to have McCalla become part of the story, as opposed just playing a narrator or musician. McCrae guided McCalla in exercises exploring her own Haitianness. As strong memories of a summer spent in Haiti with her grandmother came forward, it became clear that their way into this story would be personal.

What ultimately resulted is a richly layered multimedia piece made up of old film footage, audio from the station archives, interviews with Montas, and live reenactions of Haitian life through dance and silhouette, with voiceovers from McCalla sharing stories, and of course music—lots of music.

Dancing and drumming are integral to the piece, just as they are in Haitian culture. Dancer Sheila Anozier and drummer Jeff Pierre, both of whom grew up in Haiti, along with longtime McCalla collaborator and percussionist Shawn Myers, all brought their expertise to staging the production.

The creative team was acutely aware of how often Haiti is represented by stereotypes. They wanted to avoid repeating that mistake. Here, they were guided by Laurent Dubois, Haiti specialist and Professor of History and Romance Studies at Duke. In his recent book, Haiti: The Aftershocks of History, he writes about Haiti being known as a place of poverty and corruption, one blamed by many for its own wretchedness. He helped the team navigate the misunderstandings that have plagued the small island nation for years.

Audience members confirmed that the team hit its mark.

“Anyone who has ever visited Haiti will affirm that a day on the noisy streets is an intoxicating journey that moves in unpredictable waves through hope, despair, defiance, and celebration. All of that was fully offered up to me in this intensely intimate portrait of a country I have loved for nearly eighteen years.” — Sally Bates, retired chaplain of the Duke Divinity School, frequent visitor to Haiti.

“The reach the project had on campus was extraordinary, bringing together faculty, staff, and students from a range of departments and academic units,” says Brian Valentyn, manager of campus and community initiatives for Duke Performances. “Since the opening of the Rubenstein Arts Center in 2018, Vice Provost for the Arts Scott Lindroth has encouraged Duke Performances to dream up ways to fully utilize and activate the new space.

“It was really gratifying to be able to offer Duke and Durham audiences so many ways to engage with these artists in the days leading up to the premiere, including a public conversation, a dance workshop, and an immersive audiovisual exhibit on Radio Haïti—all taking place in the Ruby,” says Valentyn.

“From the beginning, we knew this project had the potential to be something very special. It’s been wonderful to see it take shape over the past three years, and we couldn’t be happier with the result,” says Valentyn. “McCalla is an enormously talented musician and, like McCrae, has a storyteller’s ability to confront complex social and political themes in a way that feels effortless and full of compassion for those whose history she brings so vividly to life.”

“It was an incredible experience working with Duke Performances and the university,” says McCrae. “I really appreciated that they were always supportive of the vision. We were able to tell the story of Radio Haïti in a way that is not just a historic, fact-based narrative, but one that really had a human story with human characters.”

“I humbly bow down to all of Radio Haïti’s journalists and all of the people in Haiti who lived through those very tumultuous political times and felt unheard,” says McCalla. “And there are still a lot of people who feel unheard.”

Radio Haïti-Inter gave voice to the Haitian people in their own language. In turn, through Breaking the Thermometer to Hide the Fever, McCalla and team have honored this history of Haitian resilience in a way that only art can.

Breaking the Thermometer to Hide the Fever

Duke Performances' Manager of Campus and Community Initiatives, Brian Valentyn, revisits the nine-day residency and world premiere run of Leyla McCalla's Breaking the Thermometer to Hide the Fever. This post also features the premiere of a film of the project by Saleem Reshamwala and John Laww of KidEthnic. 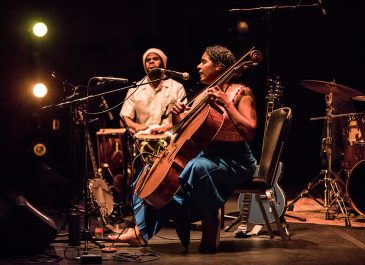