Beyond Broad Strokes: Renzo Ortega at the Ruby

In June 2019, artist Renzo Ortega was in residence at the Ruby painting studio, where he created several vibrant paintings informed by his complex understanding of identity, heritage and art.

In June 2019, artist Renzo Ortega was in residence at the Rubenstein Arts Center, where he created a group of paintings informed by his perspective as a Peruvian artist living in the United States. Ortega is a prolific painter—he created over ten new works during his four-week stay in the Ruby’s painting studio.

Walking into his space, you immediately notice the sheets of canvas covering the walls from ceiling to floor. With a handmade tool of two worn-down brushes attached to either end of a pole, Ortega can reach to paint across the length of one of these huge canvases. His work is direct and elegant—much like his attitude toward painting. “If I want to paint a flower, I paint a flower. If I want to paint a riot, I paint a riot. If I want to make an abstraction, I make an abstraction,” shared Ortega.

Yet within this simple ethos, Ortega finds a rare depth of meaning toward his identity as a Peruvian painter. His work at the Ruby asks us not only to rethink Peruvian art, but also to rethink the art of academic institutions, of European painters, and of painting as a whole.

“What was one of the first forms of self-expression we created as humans? Painting,” says Ortega. “To me, painting is an act of resistance.”

Ortega was raised in Peru and trained at the National School of Fine Arts in Lima. With his move to the United States, the painter’s life experiences continued to submerge him in a hodgepodge of cultural influence. For 16 years, Ortega lived and worked in New York City, where he developed his identity as an artist via many different cultural influences.

He is clear to contextualize himself as a painter succeeding a long line of other artists, both Peruvian and Italian, Spanish and American, Latino and otherwise. “I feel that painting is a connection with my ancestors. I’m not only talking about my native Peruvian ancestors; I’m also talking about the influence of Spain, of Europe and of everything that came from the other side of the Atlantic Ocean.”

Ortega further explains how this complex history is reflected both within himself and in his paintings.

Ortega believes indigenous Peruvian art influenced the tradition of European painting—not just the other way around. Through his paintings, Ortega shows that Peruvian art is not solely mined for content, but that it actively blends, creates and invigorates art from many different cultures.

This blunt recognition of a European colonial history amidst Peruvian heritage is mirrored in the artist’s paintings. For his Ruby residency, Ortega chose corn as one of his central visual themes. “Corn has a lot of power to represent who I am in terms of history. Cereal grain was first domesticated by indigenous peoples, and now corn exists as part of our meals all over the world.” He goes on to visually trace this lineage. “On the left panel, I show how corn was first created. The central panel shows a conquistador trying to buy the secret of corn from an untrustable source. The third panel displays the commercialization of corn.” Through painting and a keen awareness of history, Ortega once again shows the global influence of Latin American identity on painting and culture.

This metaphor extends to the very grounds of Duke University on which the Rubenstein Arts Center was built. In one of Ortega’s paintings, a colorful swath of vibrant blue is freckled with an uneven texture. When asked how he achieved this coarse texture, Ortega replied, “I got soil from behind the studio and mixed it in with my paint. It’s Duke soil!” It was important for Ortega to have a residency at an academic institution such as Duke. Having received his masters at Hunter College, NY, Ortega found an affinity toward research as a means for understanding his artistic practice.

Duke is just as lucky to have Ortega in residence. He brings necessary contextual insights to his field, allowing the viewer to grow in their appreciation of painting alongside the artist. As he paints the truth of a violent colonial history in the Americas, Ortega simultaneously brings voice to the positive cultural synergy that informs his identity. Ortega’s work compels us toward the past so that we might envision a future with clarity, insight and vision—in other words, his “painting is an act of resistance.”

All images by Robert Zimmerman.

Ortega plans to make a group of paintings that represents our contemporary situation from his point of view as a Peruvian artist living in the United States. 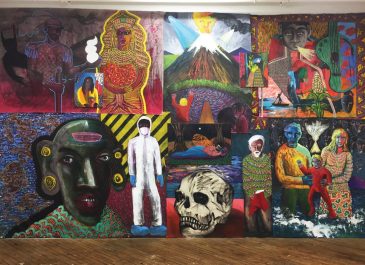