A Sonic Environment Like No Other: Dust of the Zulu

Discover how Louise Meintjes collaborated with South African photographer TJ Lemon, together with local artists and Duke graduate students including Jonathan Henderson, to transform her scholarly book into this intimate and complex exhibition at the Ruby.

In March and April 2019, Louise Meintjes and TJ Lemon’s Dust of the Zulu exhibition transformed the Ruby’s Murthy Agora into an immersive environment filled with resonating voices, glowing portraits, and vivid ethnographic video.

The Dust of the Zulu installation interpreted twenty-five years of research on ngoma, a social song and dance form performed by migrant Zulu men in South Africa. We met with author and ethnomusicologist Louise Meintjes and one of her collaborators, Jonathan Henderson, to discuss their work on this intimate and complex exhibit.

Henderson worked with fellow ethnomusicology graduate student Cade Bourne on the music production and sound design, while Duke MFA EDA student Jonghwan Choi and visual journalist Bridgette Cyr assisted in producing the stills and video. TJ Lemon, a photo journalist based in South Africa, took many of the photos in Meintjes’s book and presented a selection of his most powerful work in this installation.

What was the inspiration behind this exhibit?

Louise Meintjes: It’s a presentation of what ngoma singing and dancing looks, sounds, and feels like in rural KwaZulu-Natal. Hopefully people who come to see it will get a sense of who these singers and dancers might be. We want people to understand the pleasures that this dancing has for those who participate and also to have a glimpse of their artistic skills and life experiences.

I grew up in South Africa and completed a music degree there before I came to the United States. My focus gradually shifted from music to anthropology, where I learned that one could treat expressive forms ethnographically. As an ethnomusicologist I now span these disciplines. After collaborating with photographer TJ Lemon for some years, we published Dust of the Zulu: Ngoma Aesthetics After Apartheid (Duke University Press, 2017), which is the foundational material of this exhibit.

Jonathan Henderson: The idea was to evoke a sense of the practice, histories, and local context of the ngoma art form. It’s not meant to teach so much as to evoke a feeling of the place.

What was it like translating the book into an immersive exhibit?

LM: It’s a generous compromise on TJ’s part to have his color photographs produced in black and white in a small book. That’s not his arena. I was curious about how to sustain the ethnographic element while “remixing” the relationship between scholar and photographer.

JH: Last April, Louise and TJ put together a seed exhibition at the Frederic Jameson Gallery in the Friedl Building, with soundtracks made by undergraduate students to be played on iPhones. Cade and I were walking through that exhibit and imagining what it would be like to be immersed in a sonic environment while taking in these images. With headphones, you aren’t able to move around and allow your position in the space to shape your sonic experience.

Louise talks about how there’s an aesthetic of layering and overlap when ngoma is taking place and we tried to recreate that. It also strikes me that Louise’s writing makes wonderful use of juxtaposition, which is something we tried to echo in the exhibit space and in the photos. Even as the work turned from a book into this collaborative process, her original writing still resonates in the space.

Check it out: FHI-supported publication 'remixed' into multimedia installation

How did you create an immersive environment?

JH: It wound up being a fabulous collaborative process. We pulled together a great team of sound editors, video editors, photographers and theater technicians. We had all been working in parallel: Cade and I edited the audio score while both the video editors worked on their pieces, all while TJ was curating a batch of slides. On the week that we were hanging the show we realized that we were telling two different stories. The audio score had a morning to night arc and TJ’s slides told a story of migratory movement to and from Johannesburg. We realized we needed to make some adjustments in order to accommodate each other, so we ended up adding the piece that you see at the beginning with images of Johannesburg accompanied by city sounds drawn from Louise’s field recordings. That section wound up feeling like a particularly nice moment.

“We couldn’t have done it without the Ruby. The Ruby is designed for collaboration. It’s designed to support student-faculty interaction, which was essential for our project. We could never have done this exhibit in the time that we had without the Ruby’s technical support.” —Louise Meintjes

What challenges come with putting on an exhibition like this?

LM: When you’re making an immersive exhibition, there are several challenges. For example, what do you do about giving people names when images and sounds are moving fast and you’re trying to steep visitors in the sense of it all? What do you do when there’s no room for translation of what the people are singing? The dancers don’t want to just be presented as poor people struggling against the legacy of apartheid, even though that is part of their reality. So another challenge is finding ways to provide that context while featuring the way the dancers would like to present themselves.

An important strategy for us was to include a more explanatory register on the wall outside the exhibition gallery. There we gestured towards the ideas they’re singing about with translations of a few Zulu lyrics, and we named people in captions to their images on the wall (in contrast to the immersive part of the installation), and we offered historical and demographic summaries.

What are your next steps with this project?

LM: We’re in an experimental moment in anthropology and in ethnomusicology, prompted, in part, by developments in the digital humanities and sound studies. In a way, Dust of the Zulu fits right into that. It’s made me want to do more projects like this and to do more experimental writing, too.

We’d like to try some version of this exhibit in South Africa, particularly in Johannesburg. Additionally, in December last year, TJ and I hung a permanent exhibition of some of his photographs in the community where the dancers live. They have a new meeting house and it is a beautiful space. So perhaps the next component of this multimedia experiment will be to create a version collaboratively re-conceived with ngoma dancers for a South African public. 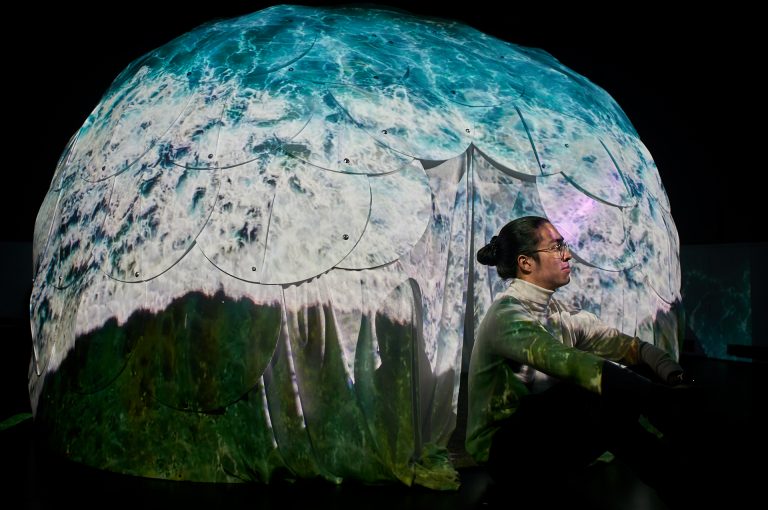 Learn more about Arts Project Residencies at the Ruby
Arts project residencies typically last up to three weeks and must culminate in a public presentation of the work, such as an exhibit, art installation, performance, or talk.