When I Say Africa: Photographs from the Continent

This exhibit of photographs by African artists aims to reframe our expectations of Africa, changing how we see the continent, and ultimately, how we engage with Africans. 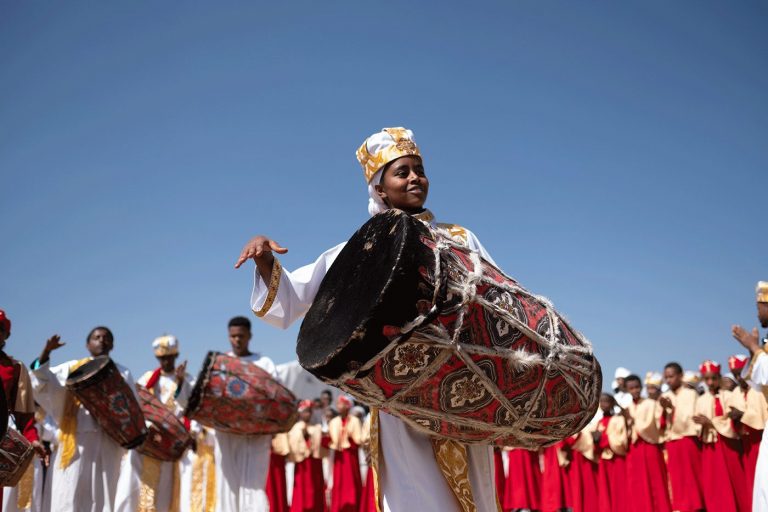 Admission
Free; open to all during visiting hours. Visiting Hours

This selection of photographs by African artists offers an alternative vision of Africa. By documenting the agency and self-determination of contemporary Africans, When I Say Africa: Photographs from the Continent challenges the “voluntourism” urge prompted by mainstream imagery of a continent in crisis. This exhibit is an interactive companion to the forthcoming film When I Say Africa.

The late Kenyan writer Biyavanga Wainiana demonstrated how the common tropes of representations of Africa in the west have remained consistent into the 21st century: rural; silent; musical; primordial; primitive; focused on the past or on tragedies. These images are central to the concept of charity for young Americans. They make Africa the space that young Americans are most likely to see as needing them to save.

“The West as a whole has decidedly taken Africa under its wing and has made it the perfect place for a nationwide empathy movement.”—on When I Say Africa (Eye Candy, “Feature: Stop Victimizing Africa!,” Afropunk)

If photographs are doing this work of extraction, When I Say Africa aims to reframe our expectations of Africa, changing how we see the continent, and ultimately, how we engage with Africans. Participating photographers include: Fati Abubakar (Nigeria, currently in Duke’s Experimental and Documentary Arts MFA program); Thina Zibi (South Africa); Barbara Minishi (Kenya); Neo Ntsoma (South Africa); and Hilina Abebe (Ethiopia).

Exhibit
When I Say Africa: Photographs from the Continent Opening Reception

Celebrate the opening of this exhibit of photographs by African artists that aims to reframe our expectations of Africa, and ultimately, how we engage with Africans. 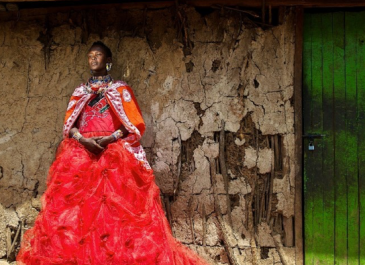 Kathryn Mathers is associate professor of the practice in International Comparative Studies and Cultural Anthropology at Duke University and writes when she feels especially passionate for the blog “Africa is a Country“. Her book, Travel, Humanitarianism and Becoming American in Africa uses observations of American travelers to southern Africa to ask: why is Africa so important to Americans?

Fati Abubakar is a documentary photographer, photojournalist, and public health worker from Nigeria who was born and raised in Maiduguri, Borno State. She has a bachelors degree in nursing, a masters degree in Public Health and Health Promotion and is currently a student at the MFA in Experimental and Documentary Arts at Duke University. She specializes in documenting cities and towns, highlighting both the positives and negatives of each location. She focuses on health perspectives, using photography as a medium to highlight the problems at community level.  She also has a keen interest in counter narratives for underrepresented communities. She has been published in media outlets including NPR, The Guardian, AFP, The New York Times, BBC, Reuters, CNN, Voice of America, Newsweek Europe, Nigerian newspapers such as ThisDay and the Blueprint. She has been commissioned to work with UNICEF, International Alert, Action Aid, and more.

Neo Ntsomais a South African photographer born in Vryburgand brought up in the rural areas of Mafikeng in the North West Province. Her fascination with film was triggered at an early age. She became the first female recipient of the Mohamed Amin Award, the CNN African Journalist of the Year Photography Prize for her photo essay entitled, “Their World in Flames.” She is the recipient of the National Geographic All Roads Photography Award and the co-author of Women by Women, a book on fifty years of women’s photography in South Africa. With the understanding of the importance of mentorship, she lectures frequently, both within and outside of the country.

Thina possesses vast experience in bringing compelling and captivating campaigns to life across multiple mediums and channels. Her photographic series have been featured in leading independent art galleries as her eye for art direction, design, and everything beautiful, is unsurpassed. Although traditionally trained as an art director in advertising, Thina needed a more powerful and freeing visual weapon to tell stories and the camera became exactly that. Her current work illustrates the meaning of femininity through the female black body as well as through her own personal experiences. Zibi’s work has been showcased in online and printed publications such as Elle Magazine, House & Leisure,10 & 5, Noted Man, Africa is a Country, the Bubblegum Club and more. She has shown her work in her debut solo exhibition titled “Andindedwa” at Agog Gallery in Johannesburg in 2017 as well as a many others.

Barbara Minishiwas born and raised in Nairobi, Kenya and discovered her passion for the visual arts after graduation from Daystar University Kenya with a BA Communication (Print Media and Advertising) degree in 2003. Primarily self-taught through exploration and experimentation, she recognized the immersive and transformative experience of power, access, intimacy, connection, belonging,and value that photography gifted her as tool to engage with herself, the community, and the world. Her personal projects have led to participation in group photography exhibitions in Nairobi with Alliance Francaise’s, Curving the Visual, a Women on Women photo exhibition, the Goethe Institut’s Mwangalio Tofauti (Different Perspectives) and Circle Art Gallery, Frontiers of the Present. She has been a fellow at the Salzburg Global Seminar, “Power in whose Palm? The Digital Democratization of Photography” and a recipient of a cultural residency with the Young Art Fund Amsterdam.

Born in Lagos, Nigeria, Andrew Esiebois a visual storyteller whose practices investigate themes such as sexuality, gender politics, football, popular culture, urbanism, migration, religion, and spirituality. His work has been exhibited all over the world. He is a winner of the 2011 Museedu Quai Branly Artistic creation prize. In 2010, he was selected to form an All-Africa Dream Team to provide alternative stories from the World Cup in South Africa. Andrew has been awarded a number of artistic residencies including the Cultures France’s Visa Pour Creation (Paris), Africa Beyond programme at Gasworks (London), Gyeonggi Creation Center (South Korea), and the Bag Factory Art Residency (Johannesburg). His attention to social issues has lead him to collaborate with several institutions including The Kings College London, University of Padova, Italy, National Geographic Magazine, The Photographers Gallery, London, Action Aids, WHO, UNICEF, Women for Women, and MSH Nigeria. He is one of the facilitators at NleleInstitut‚ a Lagos-based learning space and an experimental workstation a grooming ground for photographers.

Born and raised in Ethiopia, Hilina Abebe is a self-taught documentary photographer who was  influenced by her father’s black and white family photographs he made in the 60s and 70s. Her work focuses on long-form documentary and portraiture; exploring social issues in the community she lives in. She combines her background in Journalism and Social Work to explore issues in her storytelling.

Nana Kofi Acquah is a Ghanaian journalist, photographer, poet, painter, blogger and activist known for championing women’s rights in Africa. In 1997, he joined Atlantic FM, University of Cape Coast as a radio pPresenter. This was where he got introduced to journalism, and upon graduation, he joined Skyy Power FM in Takoradi. He is still a member of the Ghana Journalists Association. In 2008, Nana became the West African Regional Coordinator for the African Voices Project; a Dutch-funded project that recruited and trained citizen journalists on how to report using a Nokia N73. Nana is part of @EverydayAfrica, an “Instagram feed that delivers fresh, insightful images daily that counter the crippling stereotypes that have long defined an entire continent’s image from the outside”. Nana’s personal Instagram account (@africashowboy) has over ninety thousand followers. Nana was jury for the World Press Photo Contest 2019 and a recipient of the Tim Hetherington Foundation and World Press Photo Fellowship for his work.  Nana is an assignment photographer for Getty Images. He lives in Accra with the love of his life, Gloria, their three children and two dogs.

When I Say Africa is presented by the Rubenstein Arts Center as part of its arts project program with additional support by the Office of the Vice Provost for the Arts—Duke Arts. 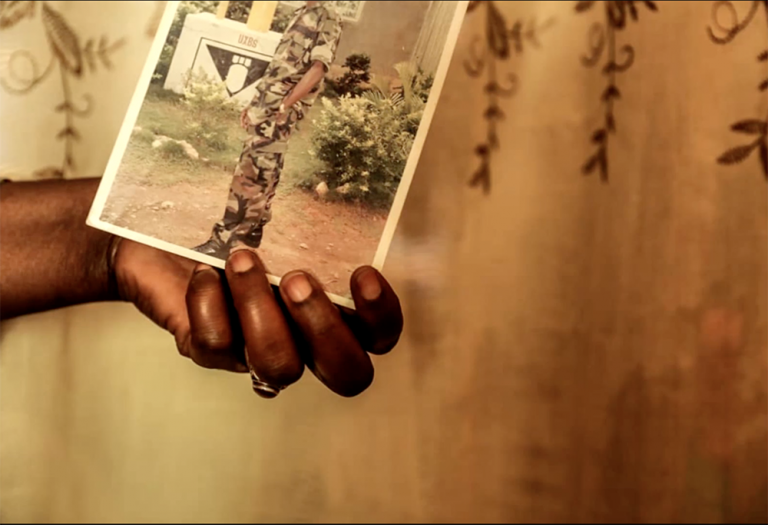 Behind-the-Scenes of When I Say Africa: Photographs from the Continent

Join Kathryn Mathers, Duke professor and curator for When I Say Africa: Photographs from the Continent for a behind-the-scenes look into this photo and film project that documents the agency and self-determination of contemporary Africans.