The culmination of Lewis Klahr’s decades-long work in collage filmmaking, SIXTY SIX is a hypnotic dream of 1960s and 1970s Pop organized into twelve chapters made between 2002 and 2015. Filmmaker Lewis Klahr in attendance. 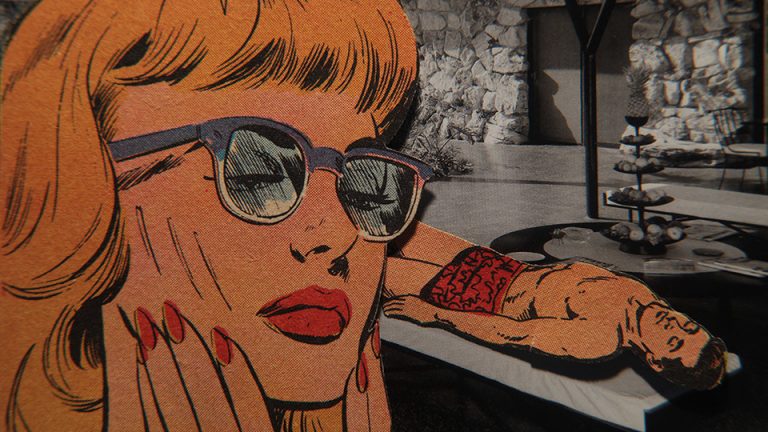 The culmination of Lewis Klahr’s decades-long work in collage filmmaking, Sixty Six is a hypnotic dream of 1960s and 1970s Pop organized into twelve chapters made between 2002 and 2015. Pulling inspiration and material from comic books, Hollywood films, Greek mythology, and newspaper ads, Klahr uses his signature stop-motion collage to follow an ensemble of classic Hollywood types as they work their way through postwar Los Angeles.

“A kind of cinematic archaeology of the American unconscious…one of the finest cinematic achievements of the year and a terrific introduction to Mr. Klahr’s work.” – Manohla Dargis, New York Times

“In the age of industrial sound and light, Lewis Klahr makes special-effects movies that are almost insanely artisanal— one man, labor-intensive animations that are at once crude and poetic, blunt and enigmatic, as funny as they are inventive… [He is] the reigning proponent of cut and paste.”—J. Hoberman, Village Voice

Artist bio: Lewis Klahr (born 1956, United States) is a Los Angeles-based experimental filmmaker. He is known for his uniquely idiosyncratic films, which use found images and sound to explore identity, sexuality, memory and history. Since creating his first film in 1977, his body of work has come to encompass a number of short digital and analogue stop-motion collages, including two feature-length films. Creating a dialogue between cut-and-paste collage, underground and experimental film traditions and the art world, Klahr digs into the heart of American culture, presenting a counter-pop history of sorts.