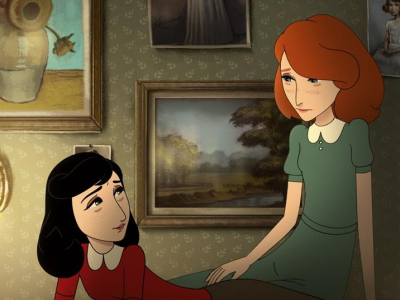 “Folman has created richly imaginative storytelling which unselfconsciously mixes the historical, the contemporary and the supernatural.” —The Guardian

—Q&A to follow w/ director Ari Folman. Preceded by a reception at 6pm.

“A tempest is raging one early morning outside Anne Frank House in Amsterdam. Inside, the glass encasing Anne’s precious diary is smashed and out of a swirl of ink and some strange magic comes Kitty, the imaginary teenage girl to whom Anne addressed her private missives. Born only with the knowledge offered in the diary’s pages, Kitty doesn’t know about the camps or what became of Anne and her family. As she purloins the journal, leaves the house, and journeys out into the 21st century in search of her only friend, Kitty encounters a world in which Anne’s story is everywhere, but the warnings inherent in her legacy are in danger of being lost.” —Diana Sanchez

“A daring and provocative use of animation with the power to haunt those to see it.” —The Wrap

About the director: Israeli filmmaker Ari Folman emerged from the 1982 Lebanon War with only vague memories of the horrors he had witnessed during his service. After nearly a decade as one of the top writers and directors for Israeli television, he began to reconstruct his experience after speaking with a fellow veteran about recurring nightmares he was having about the war. The conversation led to interviews with other vets, as well as intensive therapy on the part of Folman, all of which led to the creation of Waltz with Bashir (2008), his documentary about the violence that swept through a generation of young Israeli soldiers as a result of the war. The film, which told its stories through animation, struck a nerve with international viewers and critics, who made it one of the most acclaimed features of the year, and in turn, boosted Folman’s profile as an artist with a unique and uncompromising vision.

A reception will precede the event, beginning at 6pm.