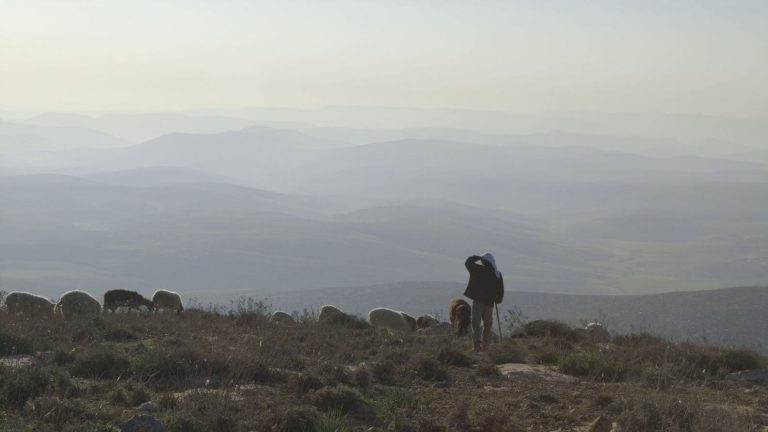 Please join us for our second special screening with director Avner Faingulernt, featuring “In the Desert – A Documentary Diptych: Avidan’s Dream”.

— Filmmaker Avner Faingulernt will be in attendance at both screenings

In The Desert is a diptych documentary about two realities, two families in one land. Both parts have a dialectic relationship to each other, an inherent tension that exists by their very juxtaposition: Omar’s Dream is about a Palestinian family; Avidan’s Dream is about a Jewish one. Both families are shepherds who live in an area of the West Bank,  South Mount Hebron, that is governed by the Palestinian Authority but controlled by the Israeli Army – which officially prohibits anyone from settling there. The two families live on opposite hills, but never meet. Omar Halil Muhammed brings his two wives Gozlan and Miriam from their comfortable house in Yata to live in a tent in the desert and herd his sheep like his ancestors. Avidan Ophir builds a farm near the place where he was born, Susiya, and wants to have his flock spread all over the hills like in Biblical times. Life in the desert is merciless, the politics are brutal, but both men find that their lives are determined by a personal struggle to define who they really are rather than by a political conflict.

About the filmmaker: Avner Faingulernt is an Israeli independent filmmaker. He is Associate Professor and the dean of the Faculty of Arts, Kibbutzim College in Tel Aviv. He was chair of the School of Audio & Visual Arts, Sapir Academic College, founder of Cinema South Festival in Sderot, chief editor of the annual “Cinema South Notebooks” and “Cinema South The Curator Book”. Faingulernt was also a visiting professor at Columbia University in New York, the University of Haifa, the Film and TV School of the Academy of Performing Arts in Prague and at Filmakademie Baden Württemberg. He is an educator and a peace activist.

Sponsored by the Duke Center for Jewish Studies, Department of Asian and Middle Eastern Studies, Duke Cinematic Arts, and the Master of Fine Arts in Experimental & Documentary Arts.