Skip to main content
The Ruby is a catalyst for creativity and a home for making art at Duke.
Happening

Closed To The Public

Fefu and Her Friends has roles available for 12 women who range in age, background, and identity. Be a part of this legendary play in production at Duke in Spring 2020. Directed by Jeff Storer. Full course credit is available for involvement in any area of the production. 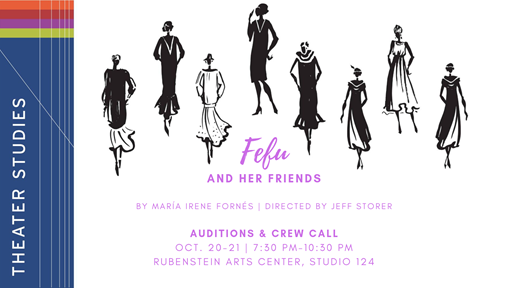 Callbacks will follow on Tuesday, Oct. 22. Under special circumstances, additional audition times may be available PRIOR to callbacks by contacting director Jeff Storer at bear@duke.edu.

“Heaven is populated with divine lovers. And in hell live the duds.”  ~Emma from María Irene Fornés’ Fefu and Her Friends

Cuban-born Fornes (who trained in Paris as a painter) was present at the birth of New York’s off-Broadway movement and became one of its guiding lights during the latter half of the 20th Century. Her work is not afraid to be funny and elegant and gritty – often in the same scene! In Fefu and Her Friends, Fornes shifts our understanding of the very place in which the play is produced by challenging the relationship between space, actresses, and audience.

“The play is about women. It’s a play that deals with each one of these (eight) women with enormous tenderness and affection…The play is not fighting anything, not negating anything. My intention has not been to confront anything. I felt as I wrote the play that I was surrounded by friends. I felt very happy to have such good and interesting friends.” ~Maria Irene-Fornes (1977)

Bonnie Marranca in describing the play has this to say: “Fefu has many of the qualities of (Fornes’) other plays – whimsy, lightness of touch, economy of style, bittersweetness, an interest in exploring human relations.”

Be a part of this legendary play in production at Duke in Spring 2020. Directed by Jeff Storer – founder and artistic director of Durham’s Manbites Dog Theater, former Theater Studies chair and director of Duke’s productions of Ragtime, The Laramie Project, and Uncle Vanya – there will be plenty of ways to get involved on- and off-stage. Don’t miss the opportunity to work on this funny, tender, milestone of American theater.

Fefu has roles available for 12 women who range in age, background, and identity. There are three ways to prepare for auditions:

The production opens April 2. We will be taking spring break off from rehearsals. You may opt to get full course credit (TS350) for being involved in any of the areas of production.