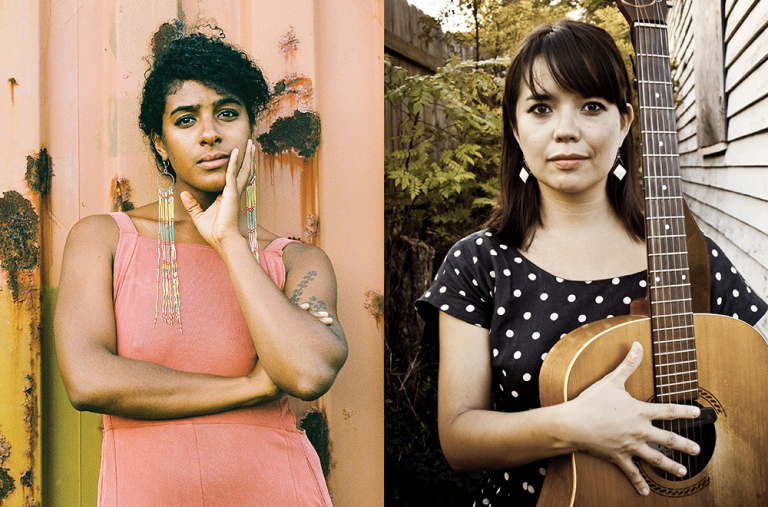 Drop by the Ruby on Fridays at noon for a casual art talk and free lunch to learn about the behind-the-scenes aspect of the creative process, careers in the arts, and more.

Haitian-American singer-songwriter Leyla McCalla, director Kiyoko McCrae, and Radio Haiti archivist Laura Wagner join Duke professor Laurent Dubois for a wide-ranging discussion of their new multidisciplinary project, Breaking the Thermometer to Hide the Fever, which explores the legacy of Radio Haiti and the political assassination of its owner, Jean Dominique, in 2000.

Breaking the Thermometer to Hide the Fever is commissioned by Duke Performances and will premiere at the Rubenstein Arts Center (March 4, 5, and 6). This live performance amplifies source materials from the Radio Haiti Archive at Duke to lift up everyday voices of resistance and celebration in late-20th century Haiti. In conjunction with this commission, the Rubenstein Arts Center is also presenting the installation Radio Haiti, curated by Laura Wagner, as part of its arts projects program (Feb 25–Mar 8, 2020).

Leyla McCalla is a New York-born Haitian-American living in New Orleans, who sings in French, Haitian Creole, and English, and plays cello, tenor banjo, and guitar. Deeply influenced by traditional Creole, Cajun, and Haitian music, as well as by American jazz and folk, her music is at once earthy, elegant, soulful, and witty—it vibrates with three centuries of history, yet also feels strikingly fresh, distinctive, and contemporary. McCalla’s debut album, Vari-Colored Songs: A Tribute to Langston Hughes, was named 2013’s Album of the Year by the London Sunday Times and Songlines magazine. It was followed by the critically acclaimed 2016 album A Day for the Hunter, A Day for the Prey, an extended exploration of the themes of social justice and pan-African consciousness that marked her debut. In January 2019, McCalla released Capitalist Blues, her first full-band album, which examines, through McCalla’s eyes, the divided sociopolitical climate in the United States.

Kiyoko McCrae is a theater maker, filmmaker, and musician. She recently co-directed Landscape with Figures with Andrew Ondrejcak for its regional premiere at Contemporary Arts Center New Orleans. She co-directed and co-wrote critically acclaimed immersive theater production, The Stranger Disease with Goat in the Road Productions and produced Vessels, which is premiering at the Annenberg Center for the Arts in March 2019. She is former Managing Director of Junebug Productions, where she directed Lockdown and produced Gomela/to return: Movement of Our Mother Tongue (NEFA NTP recipient). Her short documentary film Artist in Exile premiered at the New Orleans Film Festival in 2018, where she also won the Audience Award for Best Louisiana Short for her film Black Back. Kiyoko has toured nationally and internationally with By and By String Band, My Graveyard Jaw, and as a solo artist, writing and performing her original music. Kiyoko received her BFA in Theatre Arts from NYU’s Tisch School of the Arts.

From 2015 to 2019, Laura Wagner worked as the Radio Haiti Project Archivist at the David M. Rubenstein Rare Book & Manuscript Library at Duke University, where she created a publicly-accessible, trilingual digital archive of Haiti’s first independent radio station, Radio Haïti-Inter. She also served as the dramaturg for Breaking the Thermometer to Hide the Fever. She has a PhD in cultural anthropology, focusing on people’s experiences of humanitarian aid and displacement after the 2010 earthquake in Haiti, and is also a fiction and non-fiction writer. Her first novel, Hold Tight, Don’t Let Go, was published in 2015.

Breaking the Thermometer to Hide the Fever is made possible, in part, with a grant from the MAP Fund, supported by the Doris Duke Charitable Foundation and the Andrew W. Mellon Foundation; a grant from New Music USA, made possible by annual program support and/or endowment gifts from the Andrew W. Mellon Foundation, Mary Flagler Cary Charitable Trust, Baisley Powell Elebash Fund, and the Gladys Krieble Delmas Foundation; and a grant from South Arts in partnership with the National Endowment for the Arts and the North Carolina Arts Council.

Breaking the Thermometer to Hide the Fever is a National Performance Network (NPN) Creation & Development Fund Project co-commissioned by Duke Performances at Duke University, the Contemporary Arts Center New Orleans, MDC Live Arts – Miami Dade College, and NPN. The Creation & Development Fund is supported by the Doris Duke Charitable Foundation, the Andrew W. Mellon Foundation, and the National Endowment for the Arts. Special thanks to the Human Rights and Radio Haiti archives at the David M. Rubenstein Rare Book & Manuscript Library at Duke University for serving as the research site and partner on Breaking the Thermometer to Hide the Fever, and to the Forum for Scholars and Publics at Duke University. 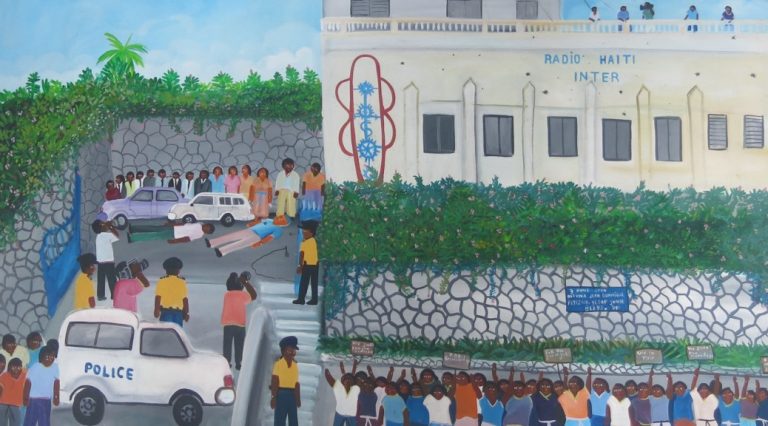 Bringing to life the legacy of Radio Haïti-Inter, this exhibit includes photographs, historical objects, and an immersive audio experience that puts the viewer inside a Haitian household.
Opening Reception

Celebrate the opening of this exhibit featuring photographs, historical objects, and an immersive audio experience that puts the viewer inside a Haitian household.