Learn about the art and artistry of renowned Durham-based puppeteer Tarish "Jeghetto" Pipkins and watch him bring some of his fabulous creations to life. 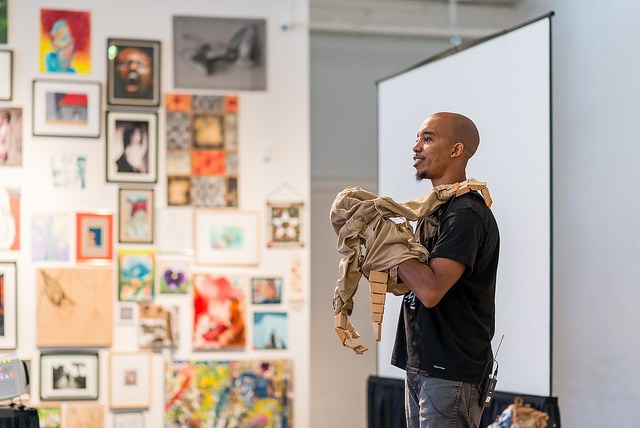 Tarish “Jeghetto” Pipkins, is a world-renowned puppeteer, performer, and educator based in North Carolina. Introducing him on the WUNC radio show The State of Things, Frank Stasio says, “Tarish Pipkins describes puppetry as composing a symphony in 3-D, and one quick glimpse at his work clarifies exactly what he means. Pipkins’ puppets are incredibly complex, but they move in both a realistic and graceful way.” Since 2005, when he moved to North Carolina and shifted focus from cutting hair to puppetry, Pipkins has worked his way from street performer to guest artist in a Missy Elliott music video.

This Ruby Friday appearance of Jeghetto and the puppets he creates will be an opportunity for the Duke community to experience that complexity, realism and grace first hand. Pipkins will demonstrate and discuss his approach to puppetry and also his experience as an independent, entrepreneurial artist.

Photo of Pipkins with puppet by Millie Taylor

Tarish “Jeghetto” Pipkins, was born in Clairton, Pennsylvania, a small steel-mill town south of Pittsburgh. He is a self-taught artist and has been creating art from a very young age. As a teenager, he moved to the East Side of Pittsburgh and graduated from Taylor Allderdice High School. In the late 1990’s, he joined the BridgeSpotters Collective and became known for his live paintings and poetry. He was also a barber for over 20 years.

In 2005, Pipkins moved to North Carolina and launched his career in puppetry. Initially, he fine-tuned his skills by performing on the street. He started working with Paperhand Puppet Intervention in 2008 and has built puppets and performed in several Paperhand productions. More recently, he had the pleasure of working with national recording artist Missy Elliott on her music video, WTF (“Where They From”), controlling the Pharell puppet and doing some puppet building. He also worked on an Amazon Echo commercial featuring Missy Elliott and Alec Baldwin as puppets.

Pipkins is married and a proud father of five children. As Jeghetto, his passion is promoting Oneness through the magic of puppetry.