Bassist Hilliard Greene and violist Stephanie Griffin create musical improvisations that bridge the jazz and classical music traditions. They’ll discuss their work together and create new music on the spot. 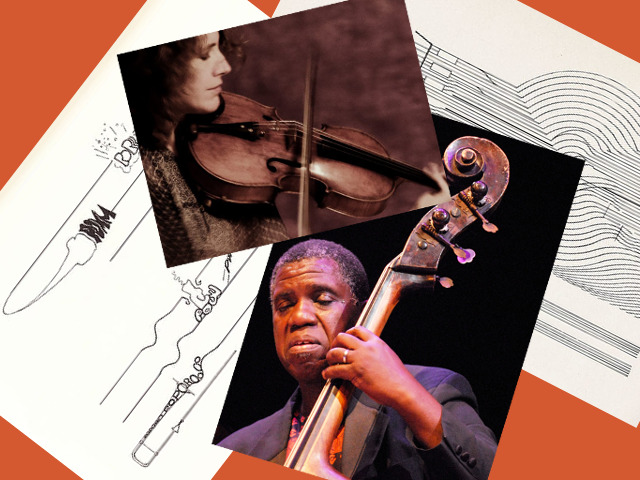 In this Ruby Friday presentation, longtime collaborators Stephanie Griffin and Hilliard Greene will discuss their contrasting musical experiences and their work together as improvisers, which they will demonstrate with live performance. The two come from distinct backgrounds. Griffin’s musical training, which includes a DMA from the Juilliard School, is rooted in the classical tradition, while Greene hails from the jazz tradition, and received his training at the Berklee School of Music. Their worlds intersected in the free improv, or avant-jazz, scene, where they perform as a duo and with other musicians in their community.

Griffin and Greene’s appearance at the Ruby will follow their Thursday evening concert at Arcana in downtown Durham—part of the Community as Creator event series. The concert will include graphic scores created by local visual artists that are interpreted as sound, works by musical performers who are now first time composers, and a new graphic score by Griffin, performed alongside a silent film.

The goal of Community as Creator is to open the creative process to the Duke and Durham communities by engaging individuals and artists, with a focus on sound. The series is made possible through the support of a D-SIGN Grant from the Office of the Vice Provost for Interdisciplinary Studies.

Stephanie Griffin is an innovative composer and violist with an eclectic musical vision. Born in Canada and based in New York City, her musical adventures have taken her to Indonesia, Singapore, Japan, Hong Kong, England, Ireland, Germany, Belgium, Mexico and Mongolia. Stephanie founded the Momenta Quartet in 2004, is a member of the Argento Chamber Ensemble and Continuum, and serves as principal violist of the Princeton Symphony and on the faculty of Brooklyn College and Hunter College. She is the recipient of the Jerome Foundation 2017 Emerging Composer Fellowship and the 2016 composition fellowship from the New York Foundation for the Arts. As an improviser, Stephanie was a 2014 fellow at Music Omi, and performs with various avant-jazz bands. She holds a Doctor of Musical Arts degree from The Juilliard School where she studied with Samuel Rhodes and has recorded for Tzadik, Innova, Naxos, Aeon, New World and Albany records.

Hilliard Greene has been studying music for more than 30 years and has been playing professionally over twenty. His emphasis is in classical, jazz, rock, blues, R&B, tango as well as the music of other continents and US regions, and solo performances.

Greene studied at the University of Northern Iowa and at Berklee College of Music in Boston and has been teaching private students and classes for over 25 years. He is currently a faculty member at the Bass Collective in New York City. He continues to teach privately and to do workshops and master classes in upright and electric bass for both children and adults.

Greene performed and recorded with Jimmy Scott for 20+ years, serving as his Musical Director from 1995 to 2013. Greene was also Cecil Taylor’s Concert Master for his group “Phtongos”. He was in residence at Minton’s a.k.a. legendary Minton’s Playhouse as the house bassist.

Hilliard Greene has recently formed The In&Out Band, a trio using jazz standards as a vehicle for free improvisation. Also, he is co-leader of the classical crossover ensemble ZigZag Quartet with a co-produced self-titled ZigZag Quartet CD. He produced three CD’s with his own ensemble The Jazz Expressions, a solo bass CD entitled “Alone”, and an upcoming CD featuring Negro Spirituals related to the Underground Railroad.